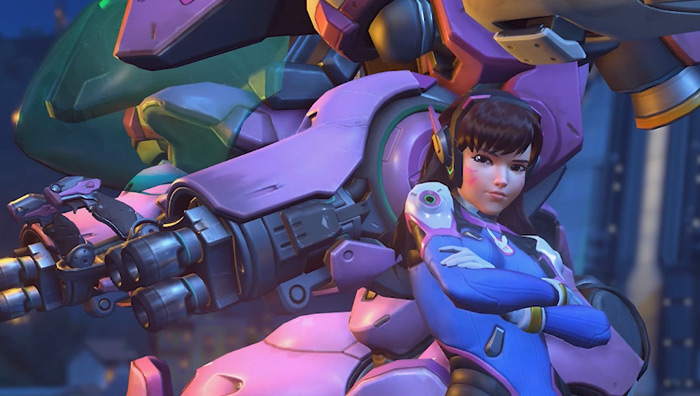 With her Fusion cannons, Defense Matrix, and large health quotient, D.VA is a formidable foe that can easily dismantle a teams defenses.

Abilities
Fusion Cannons: Dual short range cannons provide a continuous stream of fire with a heavy damage output. Using this ability slows her down.
Light Gun: When her mech falls, D.Va can still use her sidearm to defend herself in battle.
Boosters: D.Va can fly into the air, changing directions on the fly. Or she can barrel right through her enemies, knocking them back.
Defense Matrix: A forward facing anti-projectile defensive ability, that can shoot enemy fire straight out of the air.
Self-Destruct: D.Va can self-destruct, sending her mech forward to explode and take out enemies.
Call Mech: If her battle mech is destroyed, D.Va can call a new one down and continue decimating the competition.

Tactics
D.Va has two stages, the first of which is her 500 health mech, which she always spawns with. The mech causes heavy close range damage and has great defensive abilities, but its usefulness is limited to close range almost exclusively. With D.Va you will be at the front of the battle, using Defense Matrix to protect yourself and your allies while you get in range and unleash devastation. She's great for leading the charge, and her boosters can even help you get to elevated positions, where snipers are likely to be lurking. She's exceptional at dismantling sniper points since her high damage close range fire will easily best Hanzo or Widowmakers close range offensive strategies. D.Va is primarily useful for capturing points or escorting payloads but she is also quite useful for defense due to her Defense Matrix and close range Fusion Cannons.
It's always best to start any fight with Defense Matrix as you use your Boosters to close in and perform high damage fire with the Fusion Cannons, but occasionally you'll find yourself flying out of your mech as it destructs. When your mech is eliminated, you still have a chance at survival but your strategy is reversed. You weapon when on foot is a Light Gun, a short to medium range, medium damage pistol. In this case, you'll want to be back-pedaling, focusing on building heat and taking cover while your ultimate charges. You have very little health on foot, and your side-arm isn't a viable enough weapon to use in a full assault.
Thankfully your ultimate is used to recall your mech in this situation, and you can use it to have a fresh mech drop in for you. If you're still in your mech and charge up your ultimate, you can actually self-destruct your mech, sending it flying into members of the opposing team. The resulting explosion causes massive damage to members of the opposing team, but be careful: as until the next update launches, you can be damaged by the explosion as well. It may sound counter-productive to send your mech to its doom, but activating this ability while in your mech allows you to call another in for immediate use.

Pro-Tip
Using the self destruct ultimate while in the air can make it a far more difficult projectile to dodge. Use your boosters to gain a height advantage, then activate.

Strong Against
Genji: D.Va can counter Genji with her boosters, either by dodging away and firing towards him or by chasing him down and closing in for the kill. Up close, D.Va’s cannons are immensely powerful against him.
Bastion: Bastion’s turret mode only does half damage to armor, so D.Va can use her boosters to close in on him, or use your defense array while your teammates take him down.

Weak Against
Mei: Because D.Va’s defense matrix cannot defend against Mei’s Endothermic Blaster, so she can freeze D.Va if D.Va isn’t playing a strong offense.
RoadHog: Due to D.Va’s large size, she is an easy target for both Roadhogs Chain Hook and Scrap Gun.

D.Va is a former professional gamer who now uses her skills to pilot a state-of-the-art mech in defense of her homeland.

Twenty years ago, South Korea was attacked by a colossal omnic monstrosity that rose from the depths of the East China Sea. The massive, lumbering construct caused catastrophic damage to coastal cities before it was driven back beneath the waves. In response, the South Korean government developed a mechanized armored drone unit, called MEKA, to protect urban environments in future engagements with the omnic threat.

The government's fears proved to be well-founded, as a disturbing pattern of attacks emerged. Every few years, the monstrosity would rise from the sea to assault South Korea and its neighbors. The omnic learned from these encounters, often reconfiguring itself in a different form and appearing with new weapons and capabilities. Each incident ended in a stalemate, with the monstrosity defeated but not destroyed.

As the omnic continued to adapt, it eventually disrupted MEKA's drone-control networks, forcing the military to place pilots in the mechs. Scrambling to find suitable candidates, the government turned to the country's professional gamers, who possessed the necessary reflexes and instincts to operate the mechs' advanced weapons systems. Top stars were drafted, including reigning world champion Hana Song, also known as "D.Va." Famous for her elite skills, D.Va was a fierce competitor who played to win at all costs, and she had a well-earned reputation for showing no mercy to her opponents.

Seeing her new mission as a game, D.Va fearlessly charges into battle alongside the rest of her MEKA unit, ready to spring to her nation's defense at a moment's notice. Recently, she has begun to stream combat operations to her adoring fans, and her growing following has turned her into a global icon.