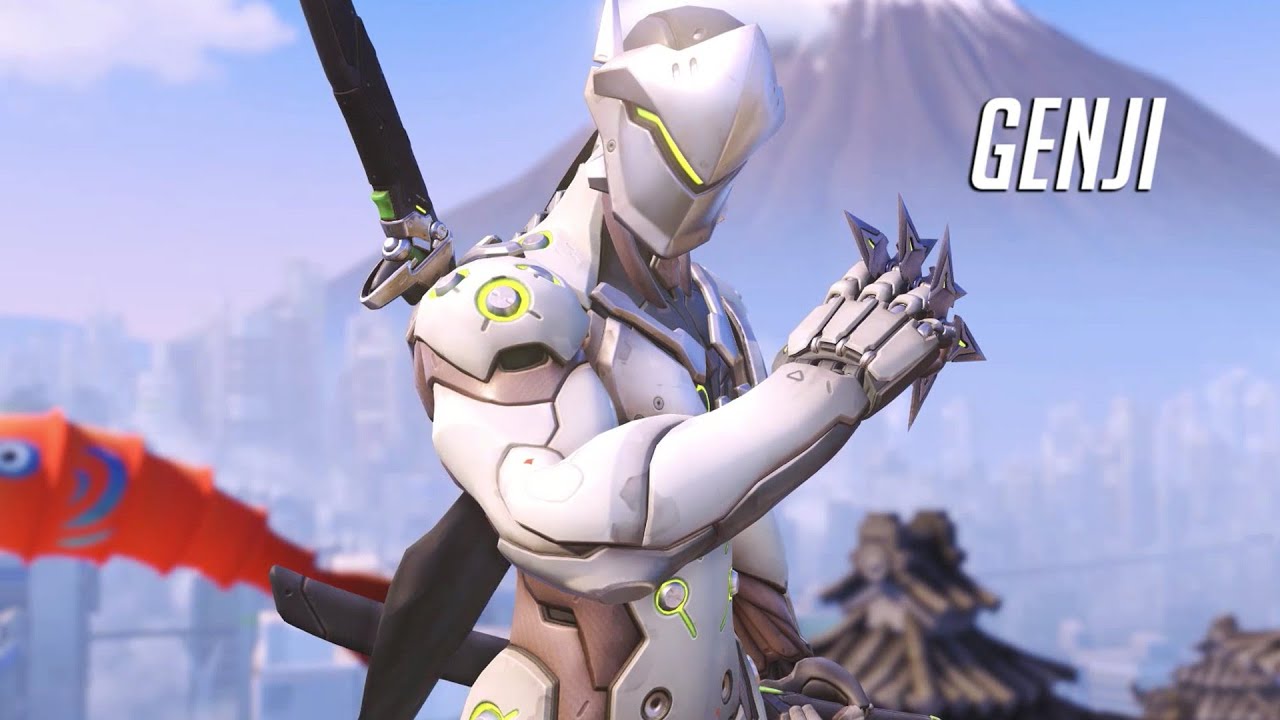 Abilities
Shuriken: 3 throwing stars thrown in succession, or they can be thrown in a wider spread reducing damage output but increasing possible confirmed hits.
Deflect: With his cybernetic enhancements, Genji is able to deflect oncoming fire with his short sword, sending the projectiles to wherever you’re aiming.
Swift Strike: Darting forward, Genji uses his longsword to cut through enemies standing along his path. If he can kill a target with this move, it instantly becomes recharged and available to use again.
Dragon Blade: Genji’s ultimate allows him to use his katana for a short period of time in close combat, dealing massive damage with fast swings.

Tactics
Genji is one of the few characters that can excel away from the pack, and he is particularly useful for finishing off enemies that are trying to retreat to safety. His primary ability, the shuriken has no damage reduction over distance, nor do they fall but they don't instantly reach the target like a firearm would. It's best to take advantage of your heightened agility and remain a difficult target while doling out successive rounds of fire towards weakened enemies. Your best bet with Genji will always be to flank, and attempt to eliminate, unwary enemies.
The Deflect ability is your defense mechanism to having been caught, and can actually be used to eliminate a character. For instance, if caught in the line of fire from a Bastion Sentry, use Deflect to send the bullets back to him. I've seen this used to eliminate Bastions straight away, both first hand as Bastion, then more triumphantly as Genji. This is best used in closer range, but keep in mind it works primarily for ballistics, as rockets and grenades will not be deflected back, but instead, will blow up in your face.
Swift Strike is a dual purpose ability, both in an offensive push, to either eliminate an enemy you've been attacking or to get away from danger. It can be used as a dodge move, and may help dodge attacks like Reinhardt's charge or Junkrat's ultimate.
Dragon Blade is meant to be used in instances when you have a couple of enemies in very close range. Using this can turn the tide of an assault objective, or clear out enemies when playing defense. Corridor domination is your best bet here, but if you do use it in an open area, target the enemies with lower health first, and eliminate them.

Pro-Tips
Using Genji's deflect ability against ultimates is possible, though it must be timed well. Sending Hanzo's back is a common example, and can prove to be a devastating way to turn the tide of battle. To do this, simply focus your attention on the enemy preparing an ultimate, and try to catch their projectiles. Unfortunately, rocket based attacks are inapplicable here.
Your Swift Strike has two purposes, to eliminate enemies of course, but also to gain ground. You can easily propel yourself around a choke point by using Genji's double jump in tandem with a swift strike to gain distance.

Strong Against
Widowmaker: Can easily sneak around and outflank widowmaker, as well as use his deflect to repel sniper fire for high damage deflections.
Bastion: Shurikens can chip away at bastions health from far away, and when he’s in turret mode, he’s especially easy to flank and close in on.

Weak Against
Pharah: Her mobility makes her a difficult target for Genji, and can’t easily reach her with his close range attacks.
Symmetra: Symmetra’s sentry turrets are a headache for any Genji player, as they have a high damage output and are excruciatingly difficult to dodge.
Torbjörn: Another turret enthusiast, Torbjorn’s upgraded turrets can easily dismantle Genji’s health bar within a few seconds.

The cyborg Genji Shimada has made peace with the augmented body he once rejected, and in doing so, he has discovered a higher humanity.

As the youngest son of the master of the Shimada ninja clan, Genji lived a life of luxury and privilege. He had little interest in the family's illegal businesses, and although he excelled at and enjoyed his ninja training, he spent most of his time pursuing a playboy lifestyle. Many within the clan considered the carefree Genji to be a dangerous liability, and they resented his father for coddling and protecting him. Following the clan leader's untimely death, Genji's older brother, Hanzo, demanded that Genji take a more active role in their late father's empire. Genji refused, enraging Hanzo. The tension between the brothers built to a violent confrontation that left Genji on the verge of dying.

Hanzo believed that he had killed his brother, but Genji was rescued by Overwatch and the intervention of Dr. Angela Ziegler. The global security force saw Genji as a potential asset in its ongoing operations to combat the Shimada clan. As Genji's injuries left him clinging to life, Overwatch offered to rebuild his body in exchange for his help. He was put through an extensive process of cyberization, which enhanced his natural speed and agility and augmented his superlative ninja skills. Transformed into a living weapon, Genji single-mindedly set about the task of dismantling his family's criminal empire.

But as time passed, Genji felt increasingly at war with himself. He was repulsed by the mechanical parts of his body and could not come to grips with what he had become. When his mission was complete, he abandoned Overwatch and wandered the world in search of meaning. He drifted for many years before crossing paths with the omnic monk Zenyatta. Though Genji initially rejected Zenyatta's wisdom, the benevolent omnic would not be deterred. In time, Zenyatta became his mentor, and under the monk's tutelage, Genji reconciled his dual existence as both man and machine. He learned to accept that although he had a cyborg body, his human soul was intact, and he came to see his new form as a gift and a unique strength.

Now, for the first time in his life, Genji is free. Even he cannot say where his path will ultimately lead.