Home to Genji and Hanzo, as well as the infamous Shimada Clan, Hanamura maintains a perfect balance of what was and what is, the past and the present. It has become a tourist destination due to its immense beauty and gateway to nostalgia. But there is something nefarious hiding beneath the surface, as Hanamura remains a tranquil mask hiding its sinister face of organized crime and tyranny. 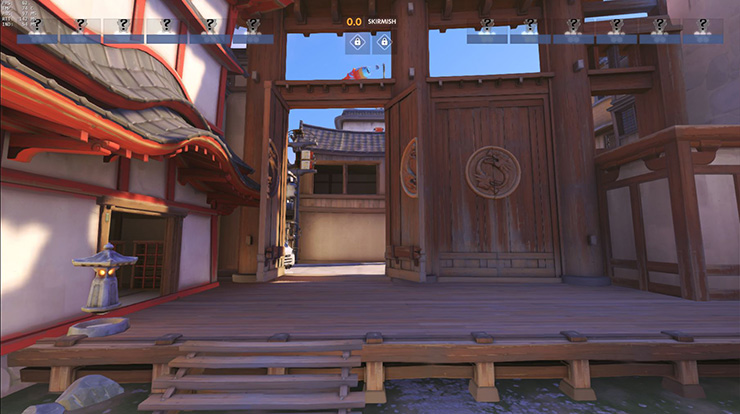 When defending on Hanamura's first area, it's best to not venture out and set up a defensive line by the Ramen shop, regardless of how hungry you are. Instead, post up by the main double door gate closer to the objective. This can be achieved most effectively by defending the main gate with a high-DPS tank like D.Va and a couple of Symmetra Turrets hidden behind the doors of the gate. Posting a Hanzo or Genji at the elevated area next to the doors and another long range character towards the back on top of the scaffolding above the objective, paired with a couple of close range defenders makes for an immensely strong defensive line. Pushing forward as attack centers entirely around using the flank to the left of the gate (when facing it from the outside) in tandem with the main opening. Having your quicker, more agility focus characters push through that elevated opening while fighting Tank v Tank at the gate is a great start to getting your team through. You should also make use of the building directly across from the gate, using a Bastion or Widowmaker there. 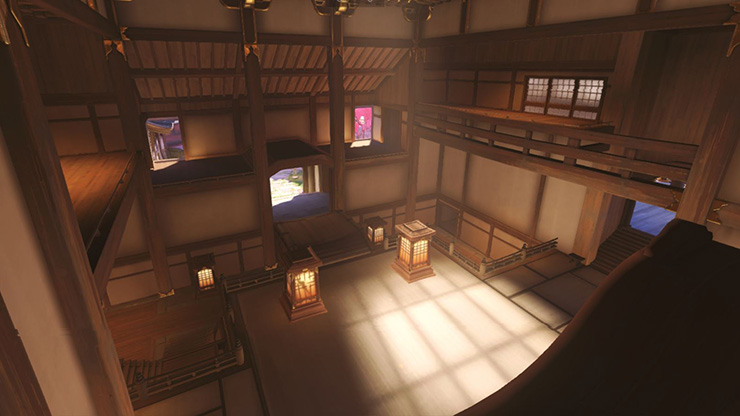 The second area on the map is a relentlessly open building that will be a constant struggle to maintain. Due to its severely open nature, your placement is less integral here, and instead, your focus should be on the Heroes which encompasses your team. It's massively important that your team consists of a Mercy and at least one other support hero, as well as a collection of high-powered team members like Pharah for her splash damage, Bastion for his range of fire and DPS in sentry mode, and Soldier: 76 for his adaptability and great range v DPS comparison. As for the attackers, you have a plethora of entry points to take advantage of but many of them are going to be limited by your heroes traversal abilities. There are multiple points to use for flanks on the ground floor, all of which lead to an open area. As for elevation towards the front, Hanzo and Widowmaker can make great use of openings above the main opening from which to rain down fire, but here you'll be completely exposed to opposing long range heroes. The main entry point is wide, and far away from the capture area, which can lead to a quick death. There is one flank that offers a far superior pathway to attack that is to the left (from outside the front), but it can only be utilized by characters with traversal based abilities. Your team must also take advantage of specific heroes, one of which must be Reinhardt, and your attack should be of two directions. Reinhardt should lead a charge from the front and through the main entrance, while Lucio should lead an escort for all traversal capable heroes on the left flank. If these points are too heavily defended, there is a flanking point to the right of the Gate that will allow every Hero to walk through. This should be used if pressure is too server from the first two, or if you can coordinate with your team and use both the left, and the right flank in tandem. To make use of this flank, simply scale the stairs up to the second floor of the building, and begin firing upon the opposing team, or stick to the wall and follow the path to get all the way behind the defending team.

For tips on how to dominate assault, head over to our assault game mode page!