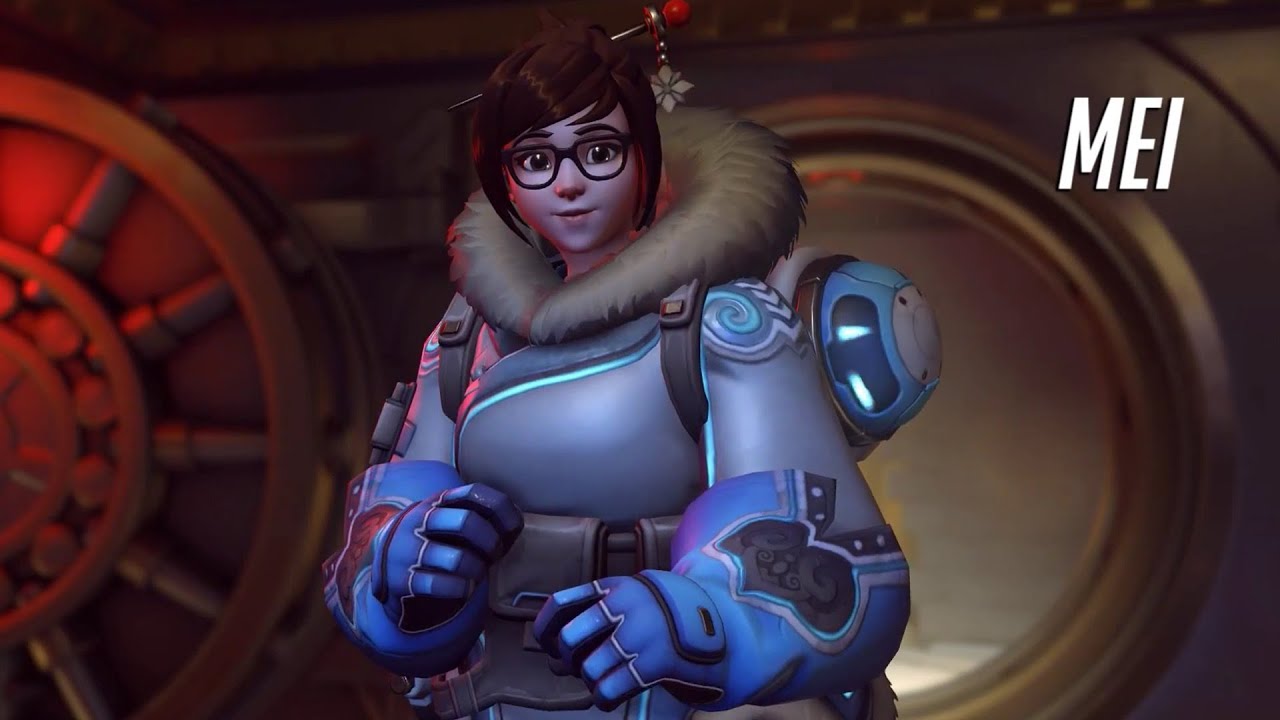 Mei’s abilities all center around climate control, from creating ice walls out of thin air, or icicles out of her opponents, Mei can be a devastating addition to any Overwatch defense regiment.

Abilities
Endothermic Blaster: A concentrate stream of sub-zero liquid can freeze her enemies in place. She can then switch to the icicle blaster function, and finish off a frozen enemy caught in her path.
Cryo-Freeze: A block of ice surrounds Mei, healing her and negating any damage sent her way. While this is active she cannot move or use other abilities.
Ice Wall: A wall of ice bursts from the ground potentially separating enemies from their goal, or Mei from impending danger.
Blizzard: Mei throws out a drone that emits a contained blizzard that slow and damage enemies, those that cannot escape the Blizzard can even be frozen solid.

Tactics
Mei can go toe-toe with any other combatant due to her Endothermic Blasters freezing stream. She's great for point control or eliminating enemies head to head. Start by freezing the enemy, which shouldn't be hard as it only takes a few seconds to freeze an enemy with a consistent stream. Then follow up with a headshot from the Icicle variant, or a melee attack (the damage of which is heightened on frozen enemies) and you've already eliminated a good portion of their health, even on the strongest heroes. Your Icewall can also be immensely helpful, as it can either allow you to close in on a combatant, or separate yourself from them, giving you enough time to retreat to safety and use Cryo-Freeze to regain health. Mei's weakness is derived from her inability to cause damage effectively at longer ranges, so she should primarily be used near objective points and in enclosed areas. She isn't a fast moving character, so meandering into an open space can lead to returning to the character selection screen, and your base, pretty quickly. Her ultimate is also exceptional for objective control, as it can freeze, or at least slow down, an entire team if they are all hovering in a single area. Use your ultimate in tandem with your Endothermic Blaster to make certain they freeze, and follow up with an icicle or melee attack and victory will be yours.

Pro-Tip
Use Ice Wall to block off entire entrances when holding a point, and pair t with your ultimate as the opposition tries to pour through. Also, combine the blasters freezing ability with the icicle shot to deal massive damage.

Strong Against
Tracer: Mei can easily freeze Tracer with her Blaster if she’s caught in the stream and due to her poor health meter, can be finished off with an icicle in no time.
Winston: Winston can only cause damage at close range, making him a prime target for Mei’s blaster. Winston has a ton of health, but once he is frozen a few icicles can dispatch him with ease, or allow you enough time to back up and escape.

Weak Against
Reaper: Though Reaper’s close range makes him an easy target for the Endothermic Blaster, his Shotguns are simply more powerful. A few shots from him will take Mei down with ease. It’s best to counter this by using an Ice Wall, or healing with Cryo-Freezer.
Widowmaker: Mei is by no means slow, but her mobility is limited. Pair this with her almost exclusively short range arsenal, she’s an easy target for a preying Widowmaker. Be certain to avoid open areas when the enemy team has a Widomaker (or Hanzo for that matter).

Story
Mei is a scientist who has taken the fight to preserve the environment into her own hands.

Though many blamed the planet's escalating, unexplained climate phenomena on the advent of new technologies, the rapidly growing omnic population, and drastically increased consumption of resources, the true cause remained unknown. To find a solution, Overwatch established a series of eco-Watchpoints at remote, critical locations worldwide.

Mei-Ling Zhou was a member of this multiyear initiative. A peerless climatologist, she had introduced cutting-edge innovations in the field of climate manipulation that protected at-risk areas in Asia and beyond. She was assigned to the program's monitoring station at Watchpoint: Antarctica when disaster struck: a sudden, catastrophic polar storm battered the installation and cut it off from the outside world, leaving the facility damaged and the scientists stranded. As their supplies dwindled, they entered cryostasis in a last-ditch effort to survive until a rescue attempt could be made.

But that rescue never came. It was years later when the team's cryogenics chamber was finally discovered. Mei, still in hibernation, was the only survivor. The world Mei awoke to had gone through considerable changes: Overwatch was no more, the serious climate issues had worsened, and none of the eco-Watchpoints were in operation. Any clues that they had uncovered were lost.

Mei has decided to continue her work on her own. Equipped with a portable version of her climate-manipulation technology, she travels around the world, hoping to re-establish the eco-network and track down the causes of the threats to the planet's ecosystem.