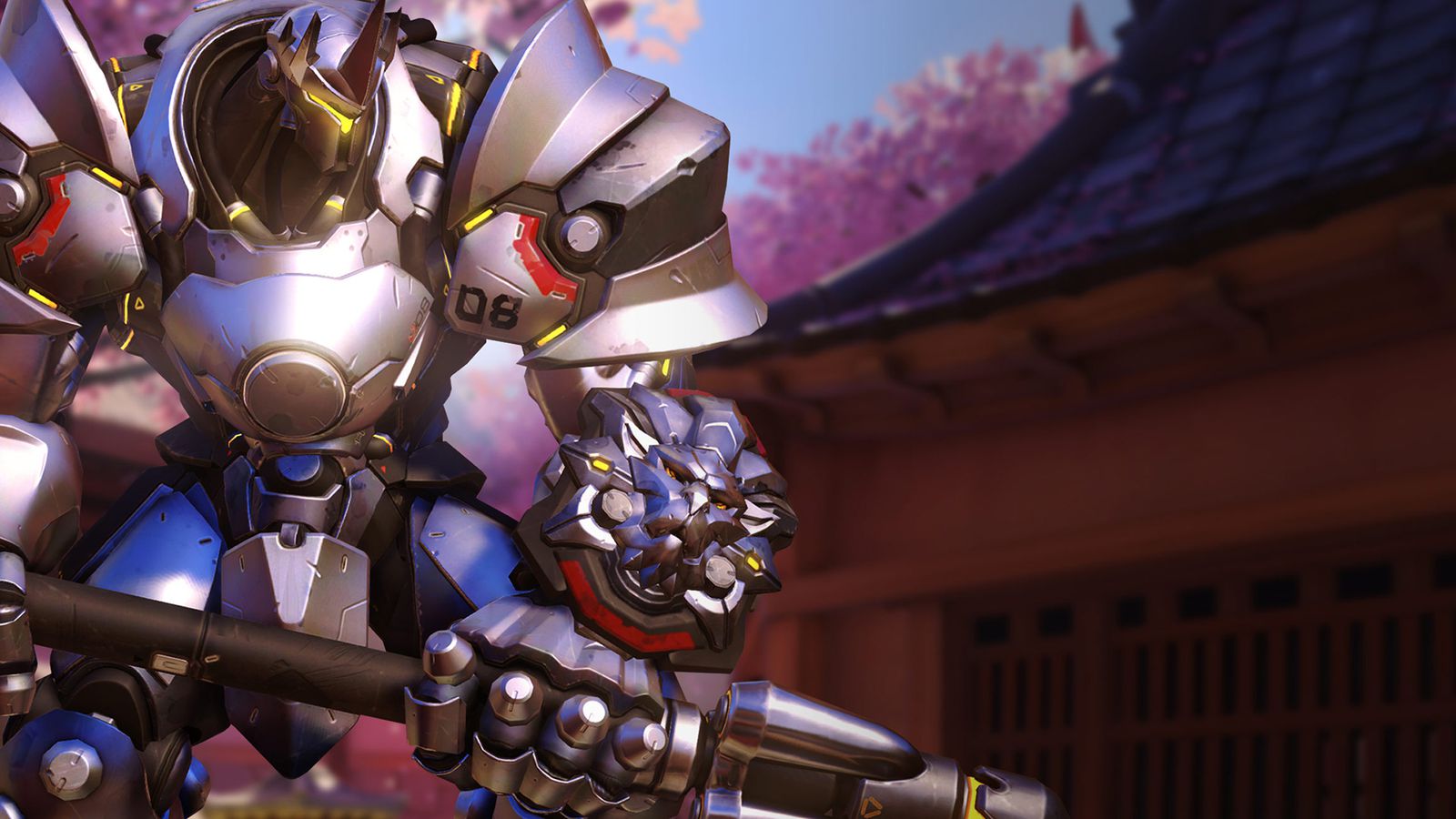 Swinging a massive Rocket Hammer and protected by his Power Armor, Reinhardt can dominate the field and protect his team from oncoming fire.

Abilities
Rocket Hammer: A Punishing melee-only weapon, it can deal massive damage at very close range.
Barrier Field: A large projected field that can protect he and his teammates from enemy fire. It can absorb a significant amount of fire before it’s depleted. Though he cannot attack while it’s deployed, his teammates can fire through it towards the enemy team.
Charge: A rush forward that pins an enemy caught in the path. If Reinhardt can pin an enemy to a wall, this ability will cause massive amounts of damage.
Fire Strike: Reinhardt’s only ranged attack is a flaming projectile that causes high damage to any enemy it comes in contact with.
Earthshatter: A ground-based ultimate that sends a shockwave knocking enemies down and damaging them.

Tactics
Reinhardt's best strategy is always at the front of the battle with his Barrier Field, though he has incredible damage output in very close range, his primary focus should always be defending the other heroes on his team. His barrier shield can soak up tons of damage as you inch towards the enemy or they run towards you and it should almost always be deployed. When defending an area and attacking enemies, starting with a Fire Strike, his only ranged attack, to cause some damage before your hammer is in range. You can then follow this up with a charge (a combo that will be able to eliminate almost any hero straight away) or a few swings of his Rocket Hammer.
Since Reinhardt is a slow, close-range Hero, you will want to refrain from perusing through an open battlefield alone. if you're leading a charge, make certain to deploy the shield to protect you and your allies from enemy fire. He can be especially useful during escort the payload matches, as his shield can provide cover for a section of the convoy while other heroes defend with their primary attacks.
His ultimate can also be devastating to the opposing team but only if timed correctly. It's a ground smash move that knocks enemies down and leaves them open to damage. If you stumble across a group of enemies, use Earth Shatter to knock them to the ground, then use Fire Strike and swings from your hammer to eliminate as many as opponents as you can. Use charge on the remaining enemy and cause either massive damage or eliminate them outright. Earth Shatter is best used in tandem with your team, as it leaves your opponents completely vulnerable. If for instance, you have a Bastion on your side in Sentry Configuration, using Earth Shatter can give him the opportunity to eliminate those enemies before they can even get up. Same goes for another Tank like D.Va who can either jump in close to fire with her Cannons or send the mech to self-destruct on top of them.
Reinhardt is the ultimate team player and using him in tandem with other Overwatch Heroes makes for a consistently powerful combination. Just be sure to not get flanked or surrounded, the Shield only protects in one direction and taking fire from multiple sides can lead to a quick demise.

Pro-Tip
Use the Fire Strikes frequently as possible, while keeping your shields up between bursts.

Strong Against
Soldier: 76: Reinhardt’s Barrier Field blocks all of 76’s attacks and with a well-timed Charge, and you’ll make quick work of 76.
Widomaker: Reinhardt’s shield provides fantastic cover for him and his team, allowing them all to make ground against her.

Weak Against
Tracer: She can easily get around both Reinhardt and his shield, dealing massive damage from just out of his reach. It’s best to try and pin her or deal with her with a Fire Strike.
Zenyatta: Since the discord orb causes all damage to be amplified by 50%, Reinhardt’s health can be completely depleted within a few seconds if he doesn’t make proper use of his shield. Using Fire Strike and a swing or two can quickly eliminate him if you can get close enough.

Reinhardt Wilhelm styles himself as a champion of a bygone age, who lives by the knightly codes of valor, justice, and courage.

Over thirty years ago, Overwatch was founded to counter the threat of the robot uprisings around the world. Reinhardt, a highly decorated German soldier, was inducted as part of the original Overwatch strike team that put an end to the Omnic Crisis. After the conflict's resolution, Overwatch grew into a global institution, keeping the peace in a war-torn world. Reinhardt proved himself to be one of its most stalwart champions.

Reinhardt's unique ethics and larger-than-life persona earned the admiration of his peers and superiors alike. Never afraid to speak his mind, he was Overwatch's most vocal supporter and, when necessary, its harshest critic, providing a constant reminder that Overwatch was meant to be a force for good.

Having served into his late fifties, Reinhardt was faced with mandatory retirement from combat operations. Despondent about being removed from active duty, Reinhardt feared that his days of purpose and glory had ended. As times grew darker and Overwatch came under suspicion of corruption and sedition, Reinhardt could only watch as the cause he had dedicated his life to defending surrendered in disgrace.

Though Overwatch was eventually disbanded, Reinhardt was not content to sit idly by while the world fell to disorder. Once again donning his Crusader armor, he has vowed to fight for justice across Europe like a knight of old, defending the innocent and winning hearts and minds with the promise of better days to come.