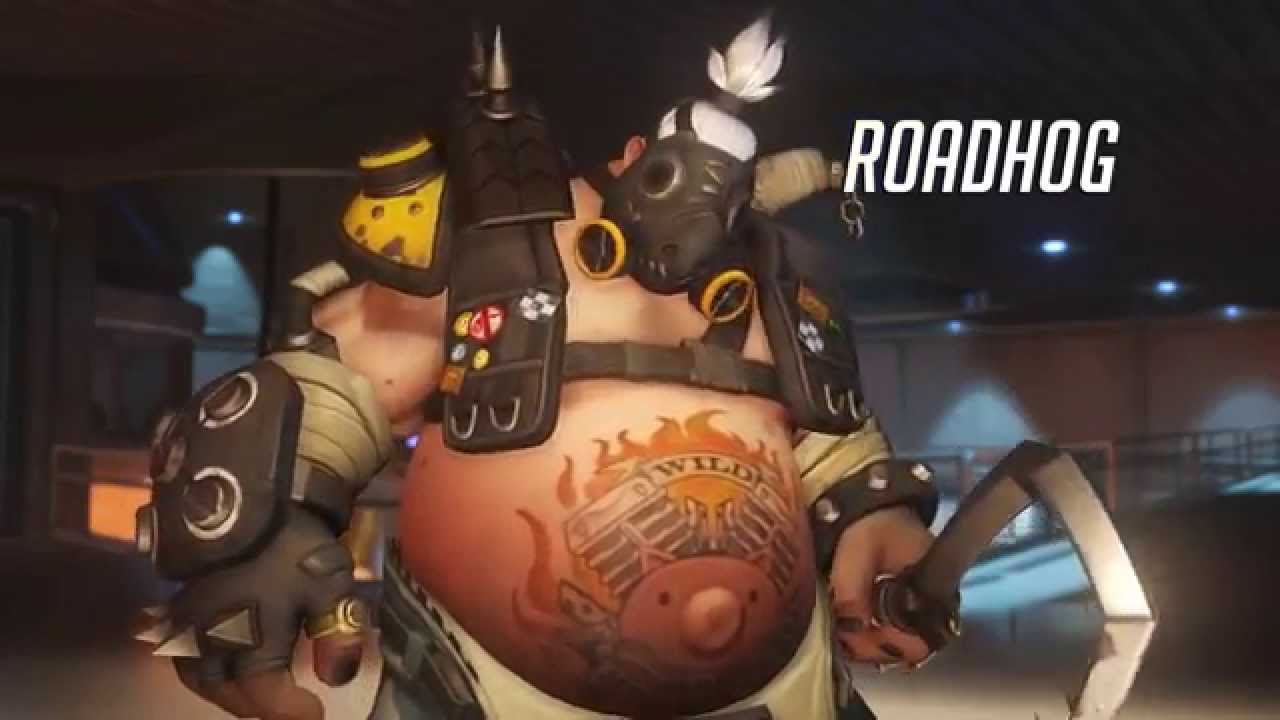 The power of Roadhog’s Scrap Gun, when combined with the Chain Hook, makes for one of the most devastating pairings in all of Overwatch.

Abilities
Scrap Gun: Shrapnel emits in devastating short range blasts, or in a ball that can detonate farther away.
Take A Breather: Roadhog can restore a portion of his health for a short time.
Chain Hook: If Roadhog can catch an opponent with his chain, he reels them within range of his Scrap Gun.
Whole Hog: His scrap gun gains a high rate of fire, causing high damage and knock enemies back.

Tactics
Roadhog is a fairly straightforward character to choose, his health is high and his damage output is significant, but there are a few hindrances to him that you should be wary of.  Like the rest of the Tank class, Roadhog only works at close range, and he is limited in movement speed. Enclosed areas are Roadhogs best friend, as he can fire away with his Scrap gun to cause sustained damage or use his Chain Hook to real someone in from across a short distance.
His role is where he differs greatly from the rest of the Tank class. He has no defensive capabilities, and cannot heal or support his teammates in any way, because of this, he is best used roaming around picking off enemies head to head. You always want to start with a chain hook as mentioned above, as it can interrupt most attacks and abilities, and reel your opponents into the ideal range for your Scrap Gun. Once you've eliminated an enemy, use your Take A Breather ability to regain some health before you move on to the next target. Stick to buildings, tight streets, and corridors, and avoid long stretches of the map or open areas as much as possible to avoid long range fire. You always want to stick to the walls, and stay out of the open area to avoid becoming the victim of a long range assault.

Pro-Tip
Always implement the 1,2 - the chain hook and then the scatter gun combo to eliminate most heroes quickly.

Weak Against
Hanzo: Because Roadhog has a very limited range of fire, he’s an easy target for the high damage arrows unleashes. It’s best to stick to cover and closed spaces while attempting to reel Hanzo in with a Hook Shot.
Soldier:  76: Since Roadhog is a large target, 76 can fill him with bullets from afar, or easily hit him with a well-placed Helix Rocket.

Roadhog is a ruthless killer with a well-earned reputation for cruelty and wanton destruction.

After the Omnic Crisis, government officials gifted the Australian omnium and the surrounding area to the omnics that had nearly destroyed their country, hoping to establish a long-term peace accord. This arrangement permanently displaced Mako Rutledge and a large number of the Outback's residents, a scattered collection of survivalists, solar farmers, and people who just wanted to be left alone.

Furious over the loss of their homes, Mako and others turned to violent rebellion. They formed the Australian Liberation Front and struck against the omnium and its robot population to take back the lands that had been stolen. Events continued to escalate until the rebels sabotaged the omnium's fusion core, resulting in an explosion that destroyed the facility, irradiated the region, and littered the Outback with twisted metal and wreckage for kilometers around.

Mako watched as his home became an apocalyptic wasteland, and he was forever changed.

Adapting to his environment, he donned a mask and took to the broken highways of the Outback on his ramshackle chopper. Little by little, his humanity was forgotten. The last vestiges of Mako faded away and the ruthless killer Roadhog was born.