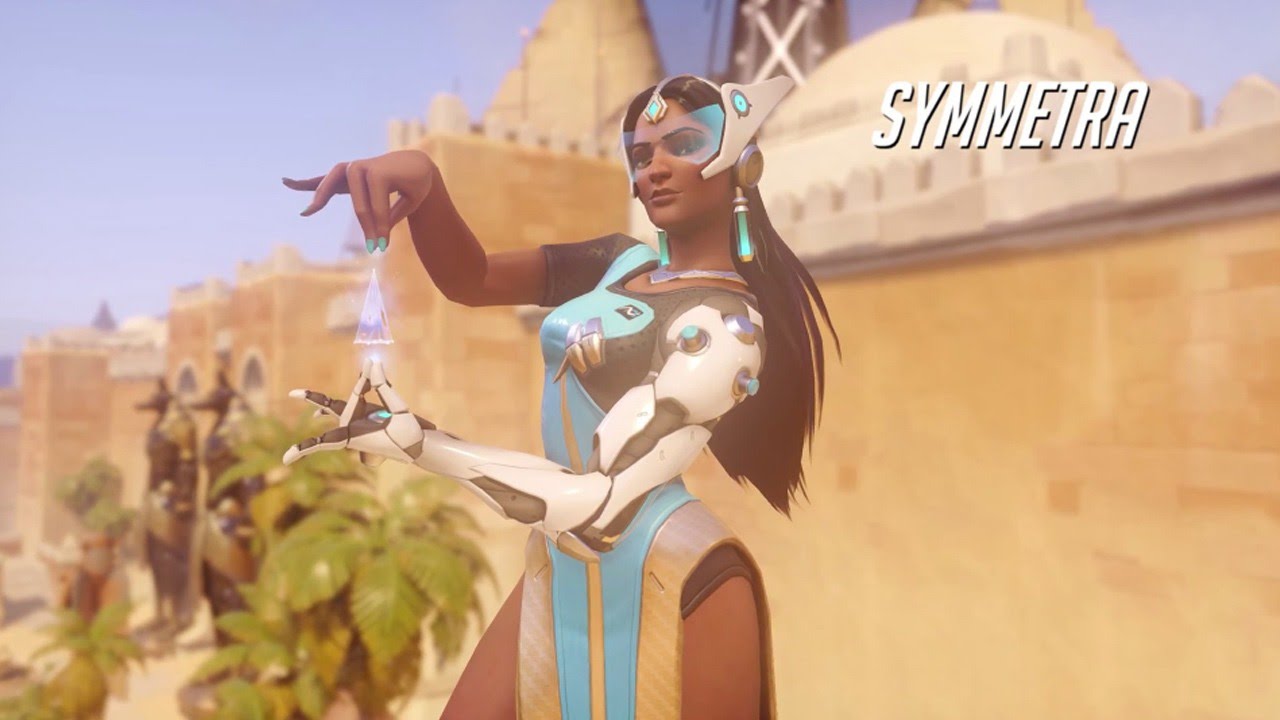 Symmetra can turn the tide of objective-based competition with her Teleporter, shield her team and use sentry turrets to lead your team to victory.

Abilities:
Photon Projector:  A short range beam that while continually connected, consistently deals more and more damage as well as deliver a high-damage charged shot.
Sentry Turret: Small turrets that can speed reducing beams that auto-targets nearby enemies.
Photon Shield: A damage sponge that surrounds an ally and negates some damage so long as that ally remains in action.
Teleporter: A two-way teleporter, that allows her teammates to return to the fray with ease if they find themselves eliminated.

Tactics
Symmetra differs greatly from other support characters in the way she bolsters her team. She has decent offensive capabilities and instead of providing bonuses for her teammates personally, she places sentry turrets to slow and damage the enemies that are caught in targeting zone. Symmetra is great for defense, and her turrets are crucial to benefiting from her more powerful abilities. Pairing the slowing effect of the turret with a Photon Orb from your primary weapon is a great means of delivering high damage in a short time. It's important to place these sentries at choke points where they can't easily be destroyed. For instance, instead of placing them on the floor inside a doorway, place them on the opposite side where they are harder to spot. Symmetra does have one ability that specifically bolsters a single teammate, the Photon Sheild. This provides an additional barrier that can make a teammate far more useful in battle. What's interesting, is her ultimate is far more useful in assualt and capture point missions. The Teleporter instantly transports your teammates wherever you place the reciever portion of the Teleporter, and can be used to easily maintain high Hero quantity at an objective
With Symmetra, you want to focus on securing points rather than supporting teammates, holding down locations and bolstering defensive points is the best way to play.
This does not mean you should stray from your teammates. Although Symmetra has great offensive capabilities, she too is susceptible to a quick demise. She has no evasive abilities, and isn't particularly fast, so you need to be wary of snipers and close range brutes when playing as her. Stick by your teammates and focus on bolstering points to secure victory.

Pro-Tip
Use your turrets in conjunction with your pulse shots, they will slow your enemies and make them far easier to target. Using them in an enclosed position is far more advantageous and can lead to an immensely secure choke.

Strong Against
Bastion: With her teleporter, Symmetra can almost completely avoid Bastion Sentries stationed at choke points along the path. She can also take down Bastion Sentries with a few shots from her charged energy orb.
Reinhardt: Even with his immense shield deployed, Symmetra can fire Photon orbs that will pass through and damage Reinhardt as he hides behind it. Placing some sentries will also make him incredibly slow, allowing you and your team to take him down safely without having to worry about him too much.

Weak Against
Pharah: Due to the limited range of her weapons and sentries, as well as the slow movement of the Photon Orb, Pharah can easily bypass all of Symmetra’s abilities, while raining down high-damage rockets. It’s best to take cover from her and attempt to force her into an enclosed space where you can slow her with your Sentries and use the Photon Orb to cause significant damage.
Reaper: Considering Symmetra and Reaper both work in close range primarily, Reaper can be a deadly threat due to his higher damage output. With just a few shots, you can be eliminated by  Repear's devastating Shotguns. It’s best to use your Sentries to slow him, and then fire off Photon Orbs to take him down.

Symmetra literally bends reality. By manipulating hard-light constructs, she crafts the world as she wishes it to be, in hopes of engineering a perfect society.

Following the Omnic Crisis, the Vishkar Corporation of southern India began the laborious process of creating new, self-sustaining cities to house the nation's displaced population. One such city, Utopaea, was created using radical hard-light technology that enabled its architechs to shape the city's streets, utilities, and living spaces in the blink of an eye.

After she was identified as one of the few capable of becoming a light-bending architech, young Satya Vaswani was plucked from extreme poverty and placed in the care of Vishkar's architech academy, never to return home. Isolated and lonely in her new life, Satya immersed herself in her education and training. She quickly grasped the applications of the technology and was one of the top students in her class. Satya approached hard-light manipulation differently than her peers, with their more procedural, mechanical constructions, instead weaving her constructs in the motions of the traditional dance of her homeland.

Though she was one of Utopaea's top architechs, the Vishkar Corporation saw far greater potential in Satya's abilities. Giving her the moniker "Symmetra," Vishkar sent her on clandestine missions around the world to uphold its corporate interests and expand its influence into other countries.

Symmetra believes her actions serve the greater good in society. But there are times when she wonders whether the control and order she desires are truly best for humanity.