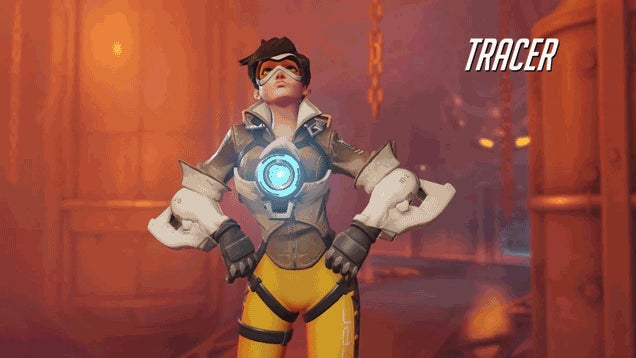 Twin pulse pistols and a teleport ability make Tracer an incredibly deadly warrior that can not only deal massive close range damage but also easily traverse the map.

Blink: Tracer can flash horizontally in whichever direction she’s moving. 3 charges can allow for Tracer to zip through the environment or around her enemies with ease.

Recall: Manipulating time to only her benefit, Tracer can bound backwards through time returning her to a previous position.

Pulse Bomb: A large sticky-bomb that sticks to any surface or opponent it lands on. After a short timer expires, the bomb explodes unleashing high levels of damage.

Tactics
Momentum is your most trusted ally when playing as Tracer, as staying still can make for a quick death when playing as her. She is best used for flanking, then escaping, doling out damage in bursts before the enemies have a chance to target her efficiently. Always go into battle with your blink ability fully charged, as it can save you in a pinch. For slower moving enemies like Bastion or Roadhog, your strategy is simple: keep moving, fire, blink, repeat. It will take just over a second to unload an entire clip, so unload on an enemy, blink and reload, then keep firing. You may even want to start with a pulse bomb to deal some heavy damage, blink away and start firing. This combo will be enough to eliminate most enemies outright, but if not, keep blinking, and keep firing. If you are surrounded, blink out or use recall to move back to a previous position. This should grant you enough time to escape while they try to target you.

Pro-Tip
Use your rewind ability to eliminate any negative attributes recently bestowed upon you, like Zenyatta's Orb of Discord, for instance.

Torbjorn: Tracer can easily circumvent his turrets and get behind him, which is especially useful for Torbjorn players that hide behind their turret, continually repairing it.

Genji: Tracers speed makes her a difficult target for Genjis shuriken attack, and at close range can easily whittle his health down to nothing.

Hanzo: With Hanzos primary attack being a slow to load bow, Tracer is a difficult target due to her speed and Blink ability.

Mei: Meis Icewall ability can lock Tracer into close range, and her Endothermic Blaster can freeze Tracer in place, leaving her no match for incoming fire.

Base of Operations: London, England

The former Overwatch agent known as Tracer is a time-jumping adventurer and an irrepressible force for good.

Lena Oxton (call sign: "Tracer") was the youngest person ever inducted into Overwatch's experimental flight program. Known for her fearless piloting skills, she was handpicked to test the prototype of a teleporting fighter, the Slipstream. But during its first flight, the aircraft's teleportation matrix malfunctioned, and it disappeared. Lena was presumed dead.

She reappeared months later, but her ordeal had greatly changed her: her molecules had been desynchronized from the flow of time. Suffering from "chronal disassociation," she was a living ghost, disappearing for hours and days at a time. Even for the brief moments she was present, she was unable to maintain physical form.

Overwatch's doctors and scientists were stumped, and Tracer's case seemed hopeless until a scientist named Winston designed the chronal accelerator, a device capable of keeping Tracer anchored in the present. In addition, it gave Tracer the ability to control her own time, allowing her to speed it up and slow it down at will. With her newfound skills, she became one of Overwatch's most effective agents.

Since Overwatch's dissolution, Tracer has continued to right wrongs and fight the good fight wherever the opportunity presents itself.