Once a flourishing manufacturing facility, Volskaya was overrun by the Omnics during the Omnic Crisis, for use in producing soldiers. Now abandoned, the facility still hauntingly moves and provides many opportunities to circumvent the defending team.

When you're playing as the attackers on this map, you will likely look to this chokepoint with fear as it is an absolutely devasting kill zone when trying to make progress. It's a common target for opposing Widowmakers or Bastions nestled in their defense positions. The path you should be taking is that of the preemptive left and the right flank that follows the chokepoint. To the left of the opening chokepoint, there is a fall off point and a ledge 20 yards forward. To traverse this, you can use, Genji, Pharah, Reaper, Tracer, Widowmaker, D.Va, Winston, Lucio and Mercy (If she is flying behind a character she's supporting). This is an immensely useful flank, as it will allow you to get behind the enemy, and make use of the elevated ground where they themselves will be stationed. The second flank, which leads to the building directly following the choke, should be taken by any hero that can't traverse this gap. The pathway leads to a point behind the objective, to the higher ground on the opposing side, which in turn affords you the opportunity to attack from two opposing sides. Reaper and Roadhog are great here, as the close range nature of these two is used to great effect in these confined spaces. This is great for disrupting the defenses, but once you're inside you must focus on eliminating any Torbjörn  Turrets or Bastion Sentries, as well as any snipers. This will allow your teammates to push through the middle and begin capturing the point. Don't forget including a support in your lineup, and here I can't recommend anyone other than Lucio. Lucio is incredibly useful for this objective when he applies his speed boost to the team, and his own push back abilities are great for defense disruption. 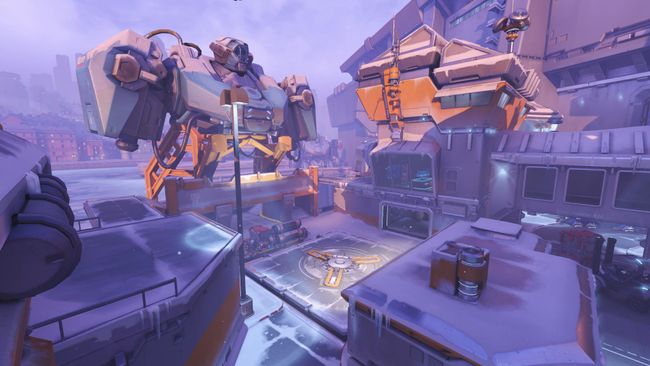 Defensively, this area of the map can be punishing if it's used incorrectly. For instance, the opening choke point is not a point you want to contest over, and skirmishes here rarely end well for the defending team. Though it may seem advantageous to position a Widowmaker or Junkrat in the walkway overlooking the spawn area, it's quite easy to end up respawning and trekking back towards objective A. Also keep in mind, the attacking teams spawn point is directly behind this, so they will have a significantly reduced respawn time by comparison. Instead, use the U-shaped balconies above the first objective, in tandem with the small building that sits just in front of it. In this building, you will want to place a Bastion Sentry or a Torbjörn Turret to cut off any members of the attacking team that venture into the objective area. You'll also want to post a sniper along this balcony overlooking the objective point, and have short-medium range heroes like McCree and Soldier 76 that can deal heavy damage from both the balcony and in a close-range skirmish, if need be. As I mentioned in the attacking portion, there are two major flanks that can be used by the attacking team. Here, you'll want a Symmetra on the left flank (when facing the attacking team) and a Roadhog or Reaper defending the other. Ideally, you will want either Zarya or Winston to constantly be in the fray on top of the objective, and include a support character like Mercy to stand with them.

In the second section, you'll be attacking the objective at a point that's significantly harder to flank. You'll notice as you make your approach that there are moving platforms that circle the objective area, and you may think of stationing yourself on top of them. Do not do this. The only time this is useful, is when planning a coordinated attack with a team you're familiar with and placing a Torbjörn turret on the platform while the rest of the team attacks from different positions. For the sake of the guide, I'll avoid this and instead focus on less outlandish, and more reasonable tactics, all of which begin with: stay off the platforms. As for your heroes, you'll want a Reinhardt and Mercy, while filling the rest with close-medium range damage dealers, especially a Junkrat for his splash damage grenades in the enclosed space. Reinhardt is fantastic for shielding while your team members begin the push towards the objective, and then break off into various directions to begin the flank from the inside. The area itself begins with a chokepoint and then breaks out into two pathways that lead around towards the back of the objective. It's important that you continually make use of these, as sustained fire from the opposing team will break through Reinhardt's shield after a few seconds of steady pelting. This area is primarily focused on providing sustained fire on the enemy while eliminating their long range defenders and healers. Bastions should also be high on the elimination priority list too, as there is both a very high chance of your encountering one and dying by one if you're caught in its crosshairs. The defenders will want to focus their defensive strategy on protecting the middle and the elevated area directly above the objective. Placing a Hanzo or Widowmaker at the elevated position is great for fire support, and a Torbjörn Turret must be placed at the mouth of the pathways nearest the objectives. Beyond this, a Bastion is a must, and should be kept in a position with a clear view of the main choke, while being supported by a Mercy if at all possible. The remaining members of the team should be high damage dealers like D.Va, Reaper, Roadhog, or 76 for the additional range. These characters should be covering the flanks, as a well timed Junkrat or Pharah invasion can easily dismantle your Bastion Sentry.

For more assault tips that you can use on any map head over to the Assualt section of the guide!