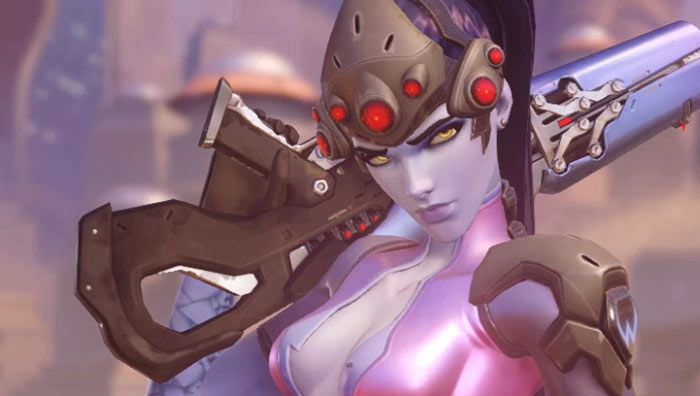 Her high powered, long range sniper rifle easily pick off enemy combatants, while her Infra-Sight ultimate helps her teammates do the same.

Abilities
Widow’s Kiss: Her dual purpose primary is both a high powered sniper rifle as well as a close to medium range submachine gun.
Grappling Hook: A device that can help Widowmaker scale large obstacles and gain advantageous positions to serve as her birds nest.
Venom Mine: A proximity mine that emits toxic gas to anyone caught in the blast radius.
Infra-Sight: Widowmaker’s ultimate is a team supporting Ability that displays enemy locations for all of her teammates to see, and take advantage of.

Tactics
Widowmaker can be an exceptionally powerful Hero if used correctly, and is best served at long ranges, safe from close range battles during defense matches. She has a submachine gun variant of her primary which can be used in closer battles, but it's rarely an effective strategy. To maximize Widowmakers potential, you first need to locate a birds nest, somewhere with a clear enough view of where the battles will be taking place. Her grappling hook is great for this, and though it has a slow recharge, it can be used to scale most obstacles with ease. Once you've reached a vantage point, secure it with a Venom Mine. This will not only begin to damage an approaching enemy, but also alert you to them, saving you from being snuck up on. Then using your sniper rifle, begin searching for any opposing snipers, as both enemy Widowmakers and Hanzos can prove just as troublesome for you as you are for them. Then fire on the slower enemies and emplacements, if you see a turret or Bastion Sentry, that should be your primary target. Then you will want to focus on the larger, slower enemies, lining up headshots as the opposing team scuffles with yours at the objective. Widowmaker's ultimate is just as useful to her as it is to her team, and should be used as soon as it's available during a skirmish. This can allow you to reposition to a more advantageous vantage point, and allow your team to prepare for an attack accordingly.

Widowmaker is less effective during the capture and attack modes, but can still be an asset if used correctly. As Widowmaker, you'll never want to be the one capturing a point or escorting the payload, but you can find points adjacent or within eye line of the points to make use of. Here you're going to want to stick to the rooftops, avoiding corridors as much as possible. Stay outdoors, and take the high ground whenever it's available. If caught in a head to head match-up at close range you are very unlikely to walk away triumphant, and strolling through the street makes you a prime target for Turrets, Bastion Sentries, and even opposing snipers.

The high ground also won't always be available in a pinch, and these instances you must stay at the back of the pack, as far back as you can. Let your Assualt and Tank teammates take the brunt of the close-combat damage while assisting them in their fights, or searching for longer-range opponents.

Truly, she is most, and sometimes only, effective at defense play, but a veteran Widowmaker can make use of her regardless of the objective. Stay out of range, and take your time lining up headshots.

Strong Against
Zenyatta: His slow movement and back of the team approach make him an easy target for a widowmaker player with a steady hand. A couple of shots to the body are enough to bring him down.
Junkrat: Widowmaker can take advantage of her distance from the action and easily take Junkrat down without ever coming into contact with his traps. His frag grenades can reach your location if shot correctly, so it’s best to go for a fully powered headshot, and eliminate him quickly.

Weak Against
Reaper: The most difficult counter for Widowmaker due to his high damage output at short range. If a reaper sneaks up on you when playing as Widowmaker, it’s best to grapple away. It’s also smart to set preemptive Venom traps to avoid a full health Reaper sneaking up on you.
Tracer: Another hero that moves fast and is devastating at close range, Tracer can easily get around Widowmaker to take her out. Due to her low health, it’s best to deal with her from afar, trying for a body shot. If you see her coming towards you, set a mine and try to change locations.

Story
Widowmaker is the perfect assassin: a patient, ruthlessly efficient killer who shows neither emotion nor remorse.

It is believed that in her former life, Widowmaker was married to Gérard Lacroix, an Overwatch agent spearheading operations against the Talon terrorist organization. After several unsuccessful attempts to eliminate Gérard, Talon decided to change its focus to his wife, Amélie. Talon operatives kidnapped her and subjected her to an intense program of neural reconditioning. They broke her will, suppressed her personality, and reprogrammed her as a sleeper agent. She was eventually found by Overwatch agents, apparently none the worse for wear, and returned to her normal life.

Two weeks later she killed Gérard in his sleep.

Her mission complete, Amélie returned to Talon, and they completed the process of turning her into a living weapon. She was given extensive training in the covert arts, and then her physiology was altered, drastically slowing her heart, which turned her skin cold and blue and numbed her ability to experience human emotion. Amélie was gone.

Now, Widowmaker is Talon's most effective assassin, feeling little save the satisfaction of a job well done.