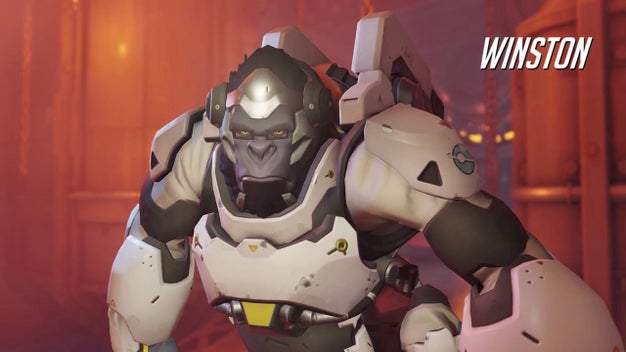 The ability to cover ground with his jump pack and his Tesla Cannon make Winston a formidable close range dominator that can defend his team while eliminating the other.

Abilities
Tesla Cannon: Close range electrical arc that continues its stream as long as it’s being fired.
Jump Pack: With a boost from his energy pack, Winston can propel himself through the air, causing damage to those caught in the splash zone when he lands.
Barrier Projector: A field that can absorb a limited amount of damage before it’s destroyed. All members of Winston’s team can be protected by it.
Primal Rage: A significant health boost, high powered melee attacks, now Winston’s rage forces him to only use his melee attack but can disrupt entire groups of enemies if timed correctly.

Tactics'
Though his health and damage output aren't substantial, Winston can prove to be immensely effective on the battlefield. The best strategy with Winston is playing offensively. When approaching an objective like payload, you're going to want to keep your Barrier Projector ready. If receiving sustained damage you can place this on the ground to protect your team from ballistic fire (though area-of-effect damage and player models can move through it), and it can even be deployed on the payload itself to create moving cover. You don't actually want to stay near the payload, instead using your Jump Pack to close in on surrounding enemies and attacking them instead. Winston is best used to in these types of assault-style scenarios by flanking the enemy team and staying mobile, creating multiple targets for the opposing team as you focus fire on them. You can also target multiple enemies at a time with the Tesla Cannon creating sustained, although not significant damage to entire groups. Staying in the heat of battle, and constantly moving works well for two reasons, first to remain a difficult target for snipers, and second to build up to your ultimate. Using your ultimate at the right time is paramount with Winston, and can instantly change the course of a match. Make certain you use it when you are engaging a group of enemies at close range as it grants you a huge boost of health, but also forces you to attack with melee only. If timed correctly this can be used in tandem with Jump Pack to cause massive damage to the opposing team, and eliminate entire groups.
Winston is best used to dismantle plans, and eliminate characters in tandem with an assault. He's great for running up on snipers and taking them out, or focusing on smaller characters with low health, but try not to put yourself in a situation with another, more DPS focused Hero. A Reaper can easily dismantle Winston's health at close range, and if you aren't constantly moving you will be an easy target for snipers too. Move fast, move frequently, target the weaker characters, and you will dominate.

Pro-Tip
Close the gap quickly with your jump pack and begin firing with your tesla. You can provide some upfront damage to give you an edge in finishing off your oponents.

Strong Against
Hanzo: Winston can use his barrier to block incoming shots from Hanzo while he closes the gap with Jump Pack and takes Hanzo out at close range.
Tracer: Due to Winston’s auto target Tesla Cannon, Tracer can be easily dealt with, considering she too must fight at close range.

Weak Against
Reaper: This is the strongest counter to Winston, his close range fire is simply more powerful, and his abilities all work to side-step Winston's abilities. It’s best to avoid Reaper if you’re playing as Winton.
Mei: Though Mei’s damage output is lower, she can freeze Winston and chip away at his health with icicles until he gets too close again, then simply repeat the process. It’s best to counter her with a Barrier Projector because her Endothermic Blaster is stopped by this.

A super-intelligent, genetically engineered gorilla, Winston is a brilliant scientist and a champion for humanity's potential.

The Horizon Lunar Colony was established as the first step for humanity's renewed exploration of space. Among its residents was a group of genetically enhanced gorillas that were intended to test the effects of prolonged habitation in space.

One gorilla displayed such rapid brain development from the gene therapy that he was taken under the wing of Dr. Harold Winston, who taught him science and inspired him with tales of human ingenuity. The young gorilla passed his days assisting with the scientists' experiments, watching the distant blue world outside his habitat window, dreaming of the endless possibilities that awaited him there.

But his life was thrown into chaos when the other gorillas led an uprising, killed the mission scientists, and claimed the colony for their own. Taking on the name of his beloved human caretaker, Winston built a makeshift rocket and escaped to Earth. There he found a new home with Overwatch, an organization that represented everything he had come to admire about humanity. Winston was finally able to live up to the heroic ideal that had been instilled in him.

Now with the fall of Overwatch, Winston has gone into seclusion, once again cut off from the world he believes in, but longing for the days of heroism to return.